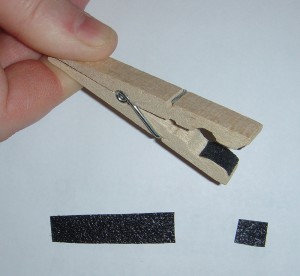 Here is how we line the clothespins with the 3M anti-skid tape. We cut pieces just the right size to cover the “business end” of the clothespin. We stick a piece on both sides (top and bottom). That’s it. You now have a low-cost, intense toy to apply to nipples and genitals. (Click image to see details and how the clothespins look on Lion’s balls)

Last week Lion said my record was 35 clothespins on his balls. I didn’t think I got that many, but challenge accepted. I said I would do regular clothespins Saturday and the tougher ones Sunday. So Saturday we sat down and made more of the sandpaper ones (NSFW images). Then I gathered up the necessary regular ones and proceeded to put 35 on Lions balls. It was a tight fit, but I was determined to do it because he insisted that was how many we’d done before. Now suddenly he was saying he misspoke. In the picture there were less. Too late! 35 it is. [Lion – The picture showed 25 on my balls]

Along the way I was stroking him and sucking him. He can’t have pain without some pleasure. When I’d taken all the clothes pins off and played with him a bit more, Lion couldn’t help but ask if I was going to do the sandpaper clothespins. He never learns.

Why don’t you quit while you’re ahead?

Oh no. Not Lion. Full speed ahead!

So I figured if he was going to be that silly, I’d oblige him with the tougher clothespins. This time, even though they were more painful, I did more at a time but I still stroked him to keep his interest up. Plus, a hard penis stays out of the way better than a softy. The more clothespins I put on, the more faces Lion made. Too bad. I was on a mission. 35 sandpaper clothes pins later I was done. I stroked and sucked him and Lion loved every minute of it.

[Lion – Actually, the clothespins are lined with anti-slip floor treatment. The grains are larger than normal sandpaper and further apart so that the force of the spring is concentrated in small, painful points. Regular sandpaper feels about the same as the unmodified clothespin. The NSFW pictures show how we make them.]

Later, as we were watching TV, Lion said, “Poor Lion.” I asked him why he was a poor Lion. He said because he didn’t get to come. I asked if he expected to and he said no. Then he can’t be a poor Lion. When he said it again later I told him if his date changes then he can say he’s a poor Lion. Or maybe I should change the date just so he has a reason to say it. It could be my equivalent of saying, “stop crying or I’ll give you something to cry about.” Nah. I don’t mind when he says it. A certain amount of grumbling is funny.

Today I’ll get him in the sling and we’ll play a game of “how much menthol rub can a Lion take before he cries uncle?” He should have let me do the sandpaper clothespins today. Silly Lion.

I was thinking about just how unique those of us who practice enforced chastity are. What started me thinking was a comment from someone who calls him/herself Bedroom Guardian:

“You found a male that would allow you to control and schedule his sexual release and wear a shock collar on his privates?”

I realized that aside from being snarky, this comment brought up an interesting point. I imagined a conversation with someone who asked me that question in person:

[her] “You found a male that would allow you to control and schedule his sexual release and wear a shock collar on his privates?”

Yup. I think it is really hot.

How do you know he isn’t jerking off when you aren’t around?

[Thinking] “uh oh.” [Speaking] Well, uh, you see I have a chastity device locked on my penis and only she can open it. It prevents me from getting an erection and from having an orgasm.”

[Her] A chastity device? There is such a thing?

[Me. Blushing furiously] “Yes, I am wearing it now.”

[Her, stealing a quick look at my crotch] “It doesn’t show.”

[My face getting redder] “No. It’s quite discreet.”

“Are you kidding? Come on. No self-respecting guy would let a woman do that to him.”

“How long have you worn it?”

[Shaking head and now openly staring at my crotch] “Really?”

[Another very long pause as her eyes stare piercingly into mine.]

[She shakes her head] “And you wear a dog training collar on your genitals? How does that work?”

“It’s strapped around my cock and balls so the shocking part is under my balls.”

“And she gives you a shock if she feels like it?”

[She turns and walks away]

I think this is a best-case conversation. Clearly, what we are doing goes absolutely against the grain of most of the world. My point is that enforced chastity isn’t just wrong to many, it’s inconceivable. Let’s face it, almost all of us would have any idea at all that people did this stuff without first reading about it on the Web.

The modern, male chastity device was invented in the 1990’s, after the Worldwide Web was invented. I found enforced chastity on a web site. At the time I discovered it, the CB2000, as far as I know the first ball capture device, hadn’t been invented yet. The web site was full of fiction and devices, almost all of them chastity belts. 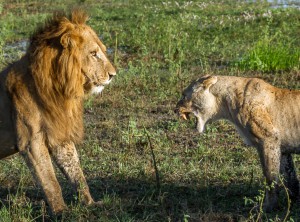 The answer is still no!

Last night I was going to let Lion simmer. I wasn’t even going to touch him. After quite a few sideways glances from him, I decided we should at least snuggle. As soon as I got close he said, “Wouldn’t you like to unlock me?” I didn’t even flinch. “No.” And poor Lion shook his head, muttering something about 2.0. I did, however, proceed to let my hands wander and listen to him purr as I got closer to his happy parts. Earlier in the evening he’d told me he was very horny. My reaction has been the same: Good. He should be.

For whatever reason, 2.0 is less inclined to give Lion bonus orgasms. Perhaps she realizes he wants to wait longer. 1.0 assumed that deciding to give him an orgasm early showed her power. 2.0 thinks he needs to wait. Ultimately 2.0 knows Lion needs to be careful about what he asks for. While she may not do everything Lion suggests, she is more likely to put her own spin on the tougher stuff. No more Mrs. Nice Lion. Nope. She’s going for broke. Broken Lion? Maybe. It depends on what nonsense comes out of his mouth.

Suppose 2.0 takes all of Lion’s suggestions. Oh boy. He’d be in big trouble. Maybe I should review every post he’s ever written and start at the beginning. Uh oh. Some of it would be do overs, but I haven’t done a lot of what he’s suggested. And I’m sure there’s a lot there he’s sorry he ever wrote down. In fact, as soon as he suggests it he knows he should hit delete before it’s ever published, but the silly boy trudges on. Should 2.0 make those dreams (nightmares) come true? All of them? Maybe I’ll make a list of his suggestions and pick and choose what to do. It will be a long list and I’m sure he’s not done suggesting things. Silly boy.

The Art Of The Tease

The combination of teasing and edging can drive me crazy. Turning my need to come into a cruel game adds a new dimension to enforced chastity.

I like 2.0’s firmer approach to me. It’s hard to articulate why, but part of it is security in knowing she says what she means and does what she says. Part of me loves a bonus orgasm, but another part feels disappointed that I didn’t go the full distance. This may be my version of the wish many chaste men have to wait longer and longer. I don’t feel the need to do that. I do like it when I am made to wait at least as long as my deadline.

The other night I asked about scheduled versus unscheduled orgasm dates. I was thinking that it is very exciting not to know if this teasing session would end in orgasm. It was frustrating just when I reached the edge and Mrs. Lion would announce,

And, other times, I would get a real feeling in my stomach when, out of the blue, she would say,

“There’s no chance for at least three more days.”

Occasionally, the number of “more days” would be longer. At the end of the three day wait, she might say,

“Nope, still not the right time. Check back in three days.”

This only happened once or twice, but it was very powerful. When I am panting from just being edged, hearing that has a very strong effect. Teasing, after all, is more a psychological game than a physical one. Occasionally, when I am very close to the edge, she will ask,

I will generally answer with an enthusiastic yes. Then, when I am about to reach the promised land,

And her hand stops. Powerful stuff.

It’s hard to say that I like this, but it adds a lot of interest to the game. This isn’t really possible with a  publicly scheduled orgasm; at least until the orgasm date arrives.

I suspect one reason this sort of thing doesn’t happen more often is that Mrs. Lion, at least version 1.0, is too kind to torture me that way. She knows I love to come. I know she loves to make me come. So there is inherent tension  that increases as wait time goes on. She is, or was, a very kind lioness and doesn’t want to make me suffer too much. I appreciate that kindness.

Then there is the reality that if I wait too long, even with teasing, I lose interest in sex. I’m not sure this is physical. I suspect that a big part is defensive. I lose interest to avoid the ongoing frustration. If I’m right, the art of teasing can extend the period of high frustration. Eventually, I will lose interest. It’s the way humans and lions are wired. We’re programmed to not waste energy on pursuing sex if none is available. However, as long as we believe sex is possible, the interest can be sustained.

Are long waits needed to play these games? I don’t think so. The wait has to be long enough to make the desperation real, but not excessive. For example, let’s say that I get desperate at about a week or so of waiting. I’m not sure that is the number for me, just saying. At that point, or a day or two before, the teasing game can begin. The actual orgasm could be only a few days after that week, but it can be made to feel like years with artful teasing. Edging is a powerful reminder of what’s being missed. Teasing magnifies the edging exponentially by combining the mental frustration with the physical. I wonder if this is something 2.0 will pursue.