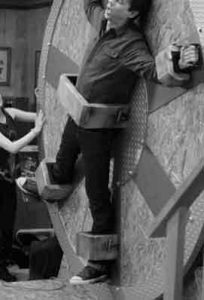 Lion likes choices even if all of them are going to hurt.

Yesterday Lion and I had our customary email conversation. Here’s an excerpt:

Lion: Uneventful drive today. Uneventful day, pretty much.
2.0: I’m sure your day will pick up after dinner. 😉 I don’t know. Just a feeling I have.
Lion: I wonder what is happening after dinner?
2.0: Usually it’s Wheel of Fortune and Jeopardy 😉

Maybe not the funniest exchange we’ve ever had, but now I had to come up with something good for him. After my shower, Lion was snoozing. Undoubtedly resting up for the evening’s activities. That’s OK. I had my idea anyway. I just needed a wide awake Lion. He had a decision to make.

Sometimes, when he knows it’s orgasm night, I give him a choice of how he’d like his orgasm. Hand, mouth or penetration. But last night wasn’t orgasm night. His choice was between menthol rub and tiny clothespins. He tried to say neither and I told him that wasn’t a choice. It would have been far easier for him if I had given him a choice between an orgasm and menthol rub. I’m pretty sure he would have had no trouble deciding. I really wasn’t sure which he would pick. I even gave him a bit of a break by not having the nastiest tiny clothespins in the mix. I figured he would never choose the tiniest ones since they hurt so much. Finally he selected menthol rub.

The last time we used the menthol rub, I slathered Lion’s balls with it. He’d said it was a wimpy strength. I figured, if it was wimpy and he’s a strong lion, he should be able to take it. Nope. I had to untie him so he could wash off. It turns out the wimpy strength is stronger than Lion. Last night I took a tiny amount on my fingertip and rubbed it into a 3/4 inch circle. After a few minutes it started working. Lion wondered why I used so much. Who’s wimpy now? It’s a good thing he didn’t choose the clothespins. I used less of the wimpy menthol than I did of the stronger menthol with him in the sling.

Luckily it wore off after about ten or fifteen minutes and we resumed our normal edging. I’m getting pretty good at taking him just short of the edge. He’s reduced to a panting puddle. And then I stop. We’ve been cuddling when I’m done with him. Last night I even held onto Mr. Weenie while we cuddled. I didn’t move. I just held him for a bit. I don’t know if that gave Lion hope that I would continue or made him stay harder longer. I just wanted to keep touching him even if I wasn’t going to edge him anymore.

This morning Lion says he’s grateful he got a choice even if it wasn’t really a choice. Maybe he’ll get more no-choice choices in the future. [Lion — I agree the choices weren’t very appealing, but they were choices. It’s nice to have a menu even if the food isn’t so good.]