↓ Skip to Main Content
Home › diapers › What The Hell Do Diapers Have To Do With A Chastity Blog?

What The Hell Do Diapers Have To Do With A Chastity Blog? 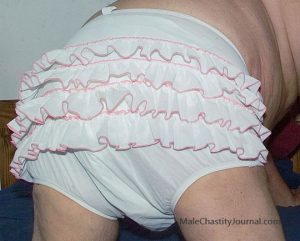 Humiliating rhumba panties are waterproof pants worn over a diaper.

The other day Mrs. Lion wrote about diaper punishments with a fairly long list of degrees of severity that ranged from changing the diaper as soon as I pee to leaving it on wet indefinitely. One of our regular readers commented that the list seemed too complicated. Mrs. Lion said that no one needs to understand it but her. She pointed out that I don’t need to understand it either. I will be told what will happen when the time comes.  Of course, she’s right, I don’t get specific advanced notice of her disciplinary plans.

I was a little surprised too. Mrs. Lion isn’t usually a list maker. She also avoids specifics about punishments as well as other activities she employs for discipline or play. Yesterday, she wrote about her resolution to be more specific with me about her plans. Was this list part of this new leaf she is turning over? She hasn’t said.

I’m sure that some of our readers are wondering why a FLR / enforced chastity blog is discussing adult diapering. This practice is usually associated with adult babies, an unrelated kink. I’m not a bit interested in being an adult baby. It’s never been a fetish of mine. However, I did suggest diapers to Mrs. Lion a long time ago. The appeal for me was a combination of control and humiliation. It isn’t very different from how I initially reacted to wearing a chastity device.

Diapers and enforced chastity have a lot in common; at least in my mind. Enforced chastity is about loss of sexual control. On a more basic level, it is loss of access to my penis. I can’t even get an erection on my own. There is humiliation involved too. Wearing a diaper  feels humiliating to me. Some guys get the same sort of feeling by wearing women’s underwear. Maybe I share that kink too. Diapers represent a different sort of physical control and humiliation. There is some discomfort having to sit in a wet diaper. More than that, it is an unmistakable reminder that I am most certainly not in control.

When I first considered diapers, I got a sexual thrill thinking about having to wear one. When I am told to put one on, the sexual thrill is gone. The sense of humiliation is mostly gone as well. It only returns if Mrs. Lion reminds me that only a baby wears diapers and I have been acting like one.

Since enforced chastity and FLR are both about surrender of power, it isn’t too surprising that other, more symbolic forms of surrender appeal to a guy who is wearing a chastity device. How many keyholders have exchanged their males’ underwear for panties? I wonder how many, like me, end up in diapers once in a while.

A very big reason for these “extras” is that most of the guys wearing chastity devices are normal, well-behaved men. They don’t act out and they do the right thing without any “help” from a dominant partner. That’s true of us. Without rules that aren’t all that important, but represent changes I should make, there would be no need for discipline or control. That may be gratifying to our disciplining wives, but leaves us without the feeling of domination we want.

I need those silly-seeming rules and the humiliating, uncomfortable punishments. They fill the need that initially motivated our power exchange. Over time, that need doesn’t go away. For me it gets more intense. Those spankings, frilly panties, nudity at home, and diapers provide the dominant energy that fuels the more profound power exchange. Yes, I hate wearing a diaper, but I need the control it represents.