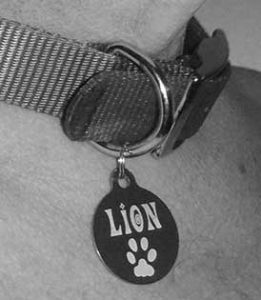 Mrs. Lion has defined “lioness 2.0” as the stricter, more consistent version of herself. She’s said that 2.0 will spank harder and longer. She will expect results. She won’t be interested in how I feel about it. Follow my rules or else! That is what she aspires to reach as a disciplining wife. I’ve been thinking about this in a slightly different way.

If I look more deeply into our domestic discipline, there is evidence that there is a significant barrier that prevents the arrival of 2.0. Consider a pattern we have established. Mrs. Lion is comfortable punishing me for spilling food on my shirt, eating first, or forgetting to remind her of punishment day. All of these infractions are minor and in no way can be considered true annoyances for her.  But when I interrupt her, she is really bothered. I have a rule in place that I should never interrupt her. I do anyway. And, interestingly, I’m almost never punished for doing it.

It’s a line that separates serious discipline from the game. I think Mrs. Lion understands this. Lioness 2.0 lives on the non-game side of domestic discipline. When 2.0 arrives, any annoyance, especially interrupting, will result in considerable suffering for me. Yes, the game will still be there. That’s what keeps me coming back and willing to suffer punishments. But the tone will be different. Just as I work to avoid eating first, I will be very careful not to interrupt or do anything else that will result in 2.0 punishing me.

I’ve been wondering why the wall between 1.0 and 2.0 is so high. Maybe Mrs. Lion is worried that getting serious will hurt our relationship. Perhaps becoming 2.0 requires some internal changes as well. As long as it is a game, the balance of roles remains as it always was. Yes, she is in control. But that control is a component of a game I want to play. When she is 2.o, it’s not my game anymore. It’s her real authority. That’s a dramatic change for both of us.

Obviously, Mrs. Lion could just add interrupting to her game rather than make the more profound change to 2.0. I don’t think she’ll do that. We both realize that regardless of which rule is being enforced, 2.0 seriously wants me to change and 1.0 doesn’t care. It’s not just a game to 2.0.

From my perspective, maybe I am better off with 1.0. She’s learned to make spankings hurt. 2.0 will make them more memorable. I think that 2.0 will also use additional childish punishments to make her point. She isn’t playing the game. She uses my need to play to get the cooperation she needs to make me change any way she wants.

Mrs. Lion says she feels that 2.0 is close. If so, our world will change. I don’t think the change will hurt us as a couple, but it will be a game changer for me