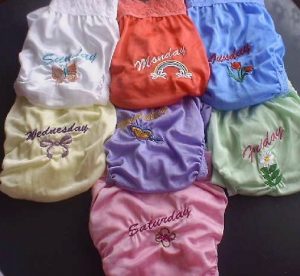 Manties makes and sells a variety of panties designed for males to wear. These day-of-the-week panties got my imagination going.They are available with the same frills that are on my green and pink panties.  (click image to go to Manties site)

Mrs. Lion has been writing about my forced cross dressing. So far it has been frilly panties. They are suprisingly comfortable. I think they feel better than my regular underpants.

That doesn’t mean I will run out and replace my underwear with panties. But if Mrs. Lion does it, while it may be potentially humiliating in the men’s room, I will be comfortable. Then what is the point of such a drastic move? It’s an exercise of control. Unlike asking me to wear red underpants, that is undeniable. Even if I forget I have them on, when I undress, go to pee in the urinal, or select my clothes in the morning, I am strongly reminded that I am not in control.

Even if I like wearing panties (I don’t.), grand gestures like forcing me to wear them 100% of the time sends a strong, long-lasting message. That message is reinforced when Mrs. Lion makes reference to my underwear. She could make me show her my selection for the day and then decide if I should wear something else. Or, she could get me day-of-the-week panties and require me to wear the correct pair each day.

Ok, my imagination is off and running. Mrs. Lion will take her time and decide what she wants me to do. You know me. I just charge ahead. Mrs. Lion is quite taken with shopping online for feminine underthings for me to wear. Yesterday afternoon, she measured my chest and hips. The last time my chest was measured I was buying a suit. How things change!

Oddly, I like the pictures of me in her post yesterday. I’m a lttle embarrassed that they are there for the world to see, but then you have seen my penis and ass without undies. I imagine Mrs. Lion will publish other cross dressing pictures of me. It’s part of the humiliation I admitted I want.

Next for me is a bra. Mrs. Lion is searching for just the right bra for me. Oh boy. She’s been showing me possibilities. Are you surprised I don’t like any of them? It doesn’t matter, within the next two weeks I will be wearing one for her (and you). I suggested padding or breast forms. If you’re gonna do it, do it! (He says having never done anything but taken bras off women)

I don’t know where this will end up, but I do know feminine underthings will be part of my wardrobe from now on. Mrs. Lion may start slowly, but she keeps going and almost never quits. I think she likes dressing me in panties. I suspect she will really like the other items she turns up. I’m not expected to like any of it. That’s the whole point.