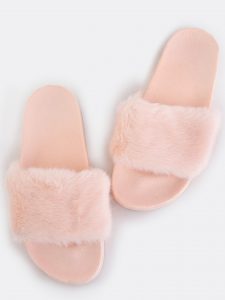 Lion really hates these, but he doesn’t get a vote.

I took some time to look at cross dressing websites when I got home yesterday. I have a specific thing in mind that I’m looking for and I’m surprised I can’t find it. Two things actually. One is a short sheer robe with feathers/fur around the neck and sleeves. The other is a pair of matching pink, fuzzy slippers. Think Zsa Zsa Gabor. The look has to exist even now. I can’t believe no drag queen has this in his wardrobe.

Lion was very happy with himself that he found pink, fuzzy slippers online. Well, they are pink. And they are fuzzy. But they aren’t really what I’m after. They’re a full slipper with fuzz all around. I’m looking for a more glamorous (for want of a better description) slipper. I found an example in women’s size to show Lion. He said he doesn’t like the open toe look. And I care, why? I’m sure he doesn’t like the idea of a sheer pink robe with feathers or fur around the neck and sleeves. His liking it is hardly the point.I do have a friend who was active for a time in Seattle’s drag queen pageants. I’ve thought of asking him for suggestions. He’s met Lion. If he asks, would I actually want to disclose that I want to make Lion pretty? It’s one thing to let a store clerk in on the secret. It’s quite another to tell a friend. There’s little chance he and Lion will ever cross paths again. We don’t work together anymore and our friendship has gone largely to Facebook, but he is a valuable source of information.

On the other hand, how far do I want to push this idea? What I find online is probably sufficient. I was able to find a few more sites yesterday and, even though they didn’t have what I was after, they do have some intriguing things. Poor Lion. I bet he never thought he’d be parading around the house in a teddy or bra. I keep telling him to be careful what he asks for. *shaking my head*