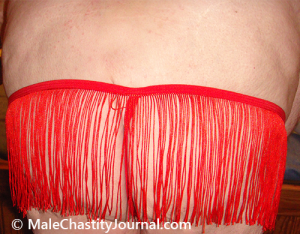 When Lion got home from work yesterday he told me he had good news and bad news. The good news was that his tendon is healed. Now, I assume, the weight bearing exercises can begin and he can work his way up to normal eventually. The bad news was that his “punishment” shirt and a few of the items I ordered arrived. He tried on the shirt and, much to his chagrin, it fits. I responded that there is worse news. After he’d picked up my package from the post office box, the other package had been delivered. I offered to pick it up on the way home. He hated the idea.

The maore I thought about it, the more convinced I was that I should leave that last package right where it is. Why not give Lion something to look forward to when we’re back from our trip? How many new things does a man need in one day? It’s an embarrassment of riches. Well, an embarrassment anyway. We’ll just get that package when we get back and Lion can model it for me then. I’m not sure if it was the arrival of his pink shirt or what, but Lion remembered to remind me of punishment day. I can’t promise him that I’ll always take such swift action as I did last night when he spilled the hot fudge. For now we’ll keep punishment nights on Mondays and Thursdays. If I forget about a transgression we can take care of it then.

The other day Lion suggested some piece of jewelry, perhaps an anklet, that he can wear when the pink punishment shirt isn’t feasible. It’s not that he’s not allowed to wear a pink t-shirt to work. It just wouldn’t be a good idea. Yesterday I came up with a different idea. He can change to face of his watch to a picture so every time he sees it he knows he’s in for a punishment. Maybe a picture of a paddle. Maybe a bar of soap. I haven’t ironed out all the details but I think it might work better than an anklet. It’s also something that I could have him change in the middle of the day if he does something annoying when we aren’t together. “What do you mean you ordered X for some expensive price? Put the picture of the paddle on your watch and I’ll deal with you later!” Anything to keep him on his toes.