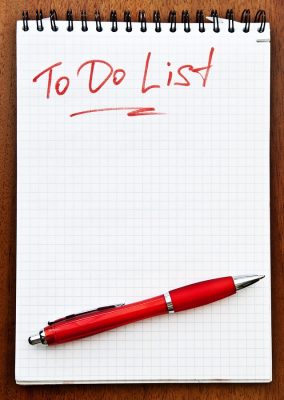 I need to make a to do list to make sure Lion gets “done”.

Lion has been a little snarky lately. It comes in conjunction with grumblings that I haven’t been consistent or “enough” in the play and FLR departments. Initially these seem like attacks to me. I think I’m doing well and suddenly I’m not. I mean, I know I’m not as strong as he wants me to be and maybe he’s just frustrated that I’m not progressing as quickly as he’d like. I know he needs a stronger hand than I am giving him, but I’m just not there yet.

I wonder sometimes how he would react if I suddenly became 2.0, or 2.5 for that matter, all the time. Within reason, of course. He’d still be autonomous in the areas he’s autonomous in now. But his ass would be mine in the other areas. Does he want to be my bitch, as Julie calls her husband? Does he want me to order him to do things? Does he want a bruised and bloody butt from punishment? Does he want me to dig a three-inch stiletto into his balls? Actually, I think a part of him does. (Not his balls in the case of the stilettos.) At least he thinks he wants to. I’m not sure what would happen if he got his wish. I guess I need to double down and give Lion what he thinks he wants. My baby steps don’t seem sufficient.

Today, for example, Lion is working from home. Last night I told him I wanted him in his hip hugger panties today. He had the choice of color. This morning he sent me a picture to prove he’s wearing them. He said they’re falling down. I told him we’d have to get him more panties because if they fall down they’re pretty useless. It doesn’t matter so much when he’s home but he can’t wear them anywhere because he has enough trouble keeping his jeans up without having to worry about his panties falling down.

He seemed somewhat excited that we’d be shopping for more. So much so that he’s off and running, looking for panties online and sending me links to what he’s found. Sheesh! Since when did “we’ll” look for more turn into “you” should look for more? Since it’s Lion. I told him I wasn’t ready to decide yet and I’d look when I get home. A line in the sand. I don’t do that often.

Perhaps it’s me that just needs to suck it up. Rather than be hurt by his grumblings that I should be doing more, I’ll take his advice and actually do more. He’d love/hate that. Let’s see how long it is before he grumbles that I’m doing too much.

6 comments on “Getting Priorities Straight”