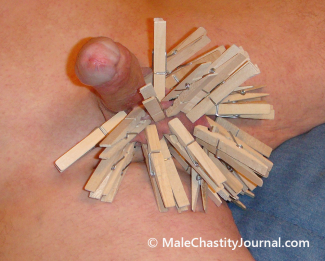 This is a more ambitious Lion pinning project. Kinda looks like a porcupine (Click image to enlarge)

Before I unlocked Lion I grabbed my bedroom bag of goodies. There are a lot of interesting toys in the bag. There’s Velcro, a rope, clothespins of various sizes and materials, and other things to make Lion feel good or bad depending on how and where they are applied. As we were snuggling Lion asked why I brought the bag over. I wondered if he was nervous. He admitted he was a little nervous. I reminded him of the Velcro and tiny clothespins. He sighed. I said neither were in my plans but they could be if he wanted them. He didn’t.

I’d decided it had been a long time since I “porcupined” his balls. I didn’t have enough readily available to go for a record but I wanted to put some on his boobies and his balls. It’s all part of my back to basics movement. Generally Lion gets very excited when he’s got a sackful of clothespins and I’m stroking him. He did get hard but didn’t stay that way for very long. Eventually I asked if he was done. There’s nothing wrong with his not being into being in the mood. He said he didn’t think anything was going to happen but it did feel good. I suggested cuddling and I’d still stroke him.

We’ve both been having some trouble sleeping again. I was falling asleep at work and Lion napped a little in the afternoon. It’s very hard to be hard when you’re tired. Snuggling and fondling are perfectly good substitutions. Lion has been known to fall asleep while his balls are rubbed. He didn’t last night. We just had a nice night snuggling and then holding hands.

We’ve got a lot of chores again this weekend but I’m sure we’ll make time for some play. I’ve been thinking about ginger again. And I found a Lucite butt plug as I was cleaning out my sock drawer last weekend. Speaking of which, I didn’t report that I donated two pair of my underwear to Lion’s drawer. He likes wearing them. They are just cotton briefs but he says they fit well and are very comfortable. I think he likes them because they aren’t frilly and lacy. I don’t think anyone would really notice them if he was caught with his pants down. The pattern on one of them is sort of flowery but the other just has stripes. I’ll have to search for more like them for his collection.