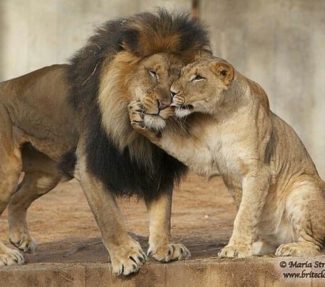 Lion needs things to remain as normal as possible.

Since Lion has so much going on this week I considered allowing him to wear his regular undies all week. Last night he asked if he could wear them today. Between the possible failing of his shoulder surgery and his sexual slump, he’s not feeling all that great. Why add panties to the mix?

I think the answer is because I can. And I should. What he needs more than ever when he’s down in the dumps is normalcy. I don’t think I realized that until this morning. In the past I’ve tried to make things easier on him by leaving him wild (which I also considered doing) and suspending his rules. Both of those sort of pull the rug out from under him. It’s like I’ve abandoned him. Not in the physical or emotional sense of marriage, but in the female led relationship sense.

When he was recovering from his surgery I had to suspend everything. He was in pain constantly and unable to do most things on his own. He needed less to worry about. And I don’t think he could have followed the rules anyway. I was always there for him. I helped him any way I could. As he got better and could do more and more, I reinstated the rules.

This is different though. It’s not a physical ailment. I’m not trying to tell Lion he should snap out of it. I’m trying to tell him that I’m still here to help him in any way I can. The rules still apply and I’ll help him through this by keeping everything as stable as I can. Of course I’ll take input from him, but I’ll decide what undies his cute butt will be in. I’ll continue to unlock him and play with him. Whether he’s able to get hard or make it to the edge is irrelevant right now. What is relevant is that we’re going to get through this like we’ve gotten through other things. We make a pretty good team.