It Feels So Good To Be Right 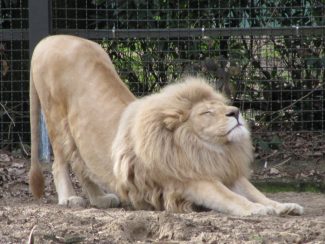 A week and a day ago during a physical therapy session, the surgeon who operated on my shoulder checked in. He asked me to move my arm in various ways. He shook his head and said he would be right back. Apparently, he went to his office to check my records. He came back and said that my tendon pulled out of the sutures and the surgery failed. He went on to blame me for sloppy sling wearing (Humph!). I politely asked him if a MRI would confirm his finding. He said it would and agreed that I could schedule one.

On Thursday of this week, I had the MRI. On Friday (yesterday), I had an appointment with him to read the results. He spent a lot of time looking at various views and then referred back to my pre-surgery MRI. He went back to his notes. Finally, he said that there was no tissue rupture. In other words, the surgery worked! He said, “I was wrong.”

Yup, you were. I was gracious about it and just said that I’m glad I asked for the MRI. Ha! Mrs. Lion was sure the surgery worked. I was too, but secretly. I was protecting myself from the realization all this suffering had been for naught. Well it wasn’t.

The surgeon asked if I could manage three physical therapy sessions a week. I said I could. Now that he knows he succeeded, he wants to accelerate my progress.

My employer won’t mind. They know I was injured on a business trip on company property. I tripped on a badly lit curb returning to my hotel. I’m not really upset with the doctor. He is a leading sports medicine surgeon (he’s the team physician for a famous professional sports team) and is well known for repairing shoulders. He can be a pain in the ass. When he first told me the surgery failed he was, how shall I say, bedside-manner free. Mrs. Lion asked if I wanted her to come yesterday. If he was going to be nasty, she wanted to growl at him. I said it was unnecessary. I am very good at growling at doctors.

It wasn’t necessary. We parted as partners to get me better fast. I can’t wait!

There’s a reason I wanted to put this on my blog. Beware of medical opinions not backed up by hard evidence. Oh, practice your growl too.

[Mrs. Lion – I did a happy dance at work when Lion told me the surgeon was wrong. I wouldn’t have been as gracious as Lion.]

2 comments on “It Feels So Good To Be Right”