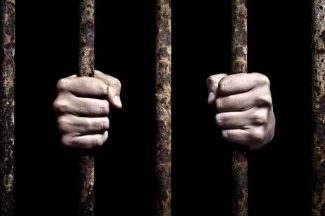 My weenie may wind up in jail.

I’ve been thinking about this on and off for a long time. Lion has been wild for quite a while. I have no real plans to lock him back up. But what if I use the cage for punishment? Then the Jail Bird would live up to its name.

Ironically, Lion has been looking at a new cage to review and it has an insert with teeth on it. He said it looked like something that could be used for punishment. Little did he know…. Granted, the Jail Bird doesn’t have teeth. It just limits his contact with my weenie.

I’m not at all sure what Lion would have to do to push me far enough to consider slapping him in jail. It’s just a thought at this point. But it is something that has cropped into my mind for a few months. Actually, when Lion mentions being locked up, I think of it.

It makes me think of grounding a teenager. “You did this to yourself, young man. Now you won’t be able to go to the prom. You’re grounded!” And Lion would be locked away. I’m sure he wouldn’t be very happy about that. At all. But it would make him think twice before he did whatever it was he did to get himself into that predicament.

I haven’t made a final determination about using the cage as punishment. Lion and I can discuss it. There may be issues I haven’t thought of.