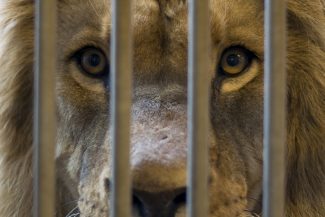 Bad behavior will result in more than a spanking. Mrs. Lion will put me back into my cage as punishment.

Since that fateful day in January 2014, my penis has resided inside a chastity device. Most of the time has been spent in a Jail Bird. It’s supremely comfortable and absolutely guarantees I can’t even get erect. Four months ago I had to be unlocked. I had shoulder surgery. I’m still recovering. Life while wearing a cage was simply too difficult while my right arm was useless. I’ve remained uncaged since then. My recovery is moving along, but I still have very limited use of my right arm.

The Jail Bird has been sitting on my nightstand waiting to be locked onto me again. I’ve enjoyed being wild. I can have erections. That’s cool. I expected that sooner or later I would end up locked again. The other day, Mrs. Lion remarked that she was fine with me wild. I told her I was fine with that too. I haven’t lost all of my initial excitement about being locked up, but over three years of continuous caging has satisfied most of my chastity ya ya’s.

Through all this nothing has changed about my enforced chastity. The only difference is that instead of steel being between me and a self-induced orgasm, I have training and discipline doing the same job. So, there is no practical reason for caging me. That is, until now.

When we first started enforced chastity, I told Mrs. Lion of stories I read that had the keyholder extending lockup for bad behavior. She didn’t like that idea. In fact, she hasn’t used withholding edging as a punishment. Yesterday, in her post, she reversed that policy. Since I am happier being wild, she reasoned that locking me up with no release for edging, would be a most excellent punishment.

Now, if she decides to use this weapon, I will be locked back up immediately after my spanking and not unlocked until I serve my time. I asked Mrs. Lion what that meant. She replied that the usual time in jail would be three days. That time could be longer for offenses that call for it. If I do something else during my lockup, I will be spanked and my sentence extended.

Now that being locked up is no longer fun, even perverse fun, Mrs. Lion can use my cage as a disciplinary tool. It has a lot of value. Instead of punishment lasting a short time, I will have multiple days to contemplate the error of my ways. There is no way I can ignore being caged. Yes, it is relatively comfortable. I won’t be in pain. But it will be a restriction I will feel at all times.

I’m a little surprised that something I originally asked for has become an effective punishment. I’m going to try hard to stay out of jail.