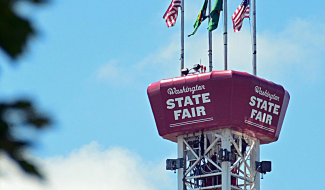 Lion and I are off to the fair today.

Lion had physical therapy yesterday. Sometimes it makes him feel better. Other times it makes him hurt. Last night was the latter. When I told him it was time for his punishment he said he didn’t feel sexy. I said it was lucky for him that punishment didn’t require him to feel sexy. But as I was swatting him I realized just how much pain he was in. I made his buns pink but not as pink as I might have if I hadn’t been trying to get his shoulder more comfortable.

We snuggled for a while. I found a position that didn’t wrench my neck while watching TV. I fondled my weenie and the boys for a bit. I wasn’t trying to get him hard but if it happened it was fine. I just wanted to make Lion feel good. After about an hour Lion needed to move his shoulder around so we held hands and continued to watch TV.

I suppose I could have made him sit in the corner after his swats. That wouldn’t have put any pressure on his shoulder. But I didn’t want him to be in any more pain than he already was. I was trying to make him comfortable. Sitting in the corner wouldn’t have accomplished anything at that point. His attention wouldn’t have been on his butt anyway. The good news is that this morning most of the shoulder pain is gone.

In a little while we’ll head out to the state fair. It’s fun to walk through the vendor areas with the barkers telling people how their lives will be enriched if they just buy this ladder or that massage chair. And when’s the last time you had your gutters cleaned? New windows perhaps? We’ve gone to concerts in the past and even a rodeo at the fair. We’ll get our fudge and maybe some cotton candy. We’ll look at the animals and watch the chainsaw woodcarvers. Mostly it’s fun just to walk around together.