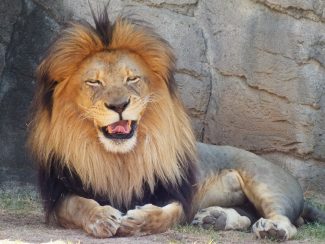 I mean, yes, I knew he’d feel my power. It’s difficult for him not to with a metal fob on his balls and weenie. My balls and weenie. And I know he loves bondage. But does the cage make him hornier? That’s the part I hadn’t considered. I do not know.

What I do know is that the cage cooperated very nicely when I first locked him up. Sometimes I have trouble with that little screw. (Who wants a little screw when you could have a big screw? But I digress.) But the other night the threads lined up perfectly the first time. My weenie was not happy to be smushed into the cage again after all that time, but the screw gave me no problems. Last night it cooperated again. I’m taking that as a sign Lion was meant to be caged.

When I first suggested playing last night, Lion wanted to wait until his allergy medicine kicked in. He’s had much less trouble lately but he still gets itchy from time to time. He let me know when he was ready. I had to strike while the Lion was hot. And hot he was.

I don’t have a reason for giving him an orgasm. Or not giving him one for that matter. I just go along edging him until I decide we’re done or I decide to give him an orgasm. It’s like a mental coin flip. Heads I win. Tails you lose. But I was also calculating how many days till Christmas and a potential holiday orgasm. I decided he’d have another five day wait and that was good enough for me.