Real Growth In Our Female Led Relationship With Discipline (FLRD)

Mrs. Lion told me that she is generally more annoyed at things. Those things include me. I wouldn’t say that my transgressions rise to a very high level, but they pissed her off. There have been two this week. She’s been torn between being unfair and wanting to send me a message. The incidents in question are in the first case, I wasn’t aware she had come home and needed my help. She didn’t call out to me but wondered why I wasn’t aware she was home. I was deep in configuring a laptop at the time.

The second case occurred yesterday. I needed some information to complete an insurance claim. I sent her an email asking her to update me right away. This upset her because she felt I expected her to stop what she was doing in order to help me. I was hoping she would do just that. The reason was that I had logged into my insurance site and hat all the data I needed except for one number. I didn’t realize she would be annoyed at my urgency. As it was, I figured out what the number could be and submitted it. I was off by a few dollars.

The events aren’t really the issue. The quandary for Mrs. Lion is when she should discipline me for essentially random events that annoy her. At the time, I felt that it would be unfair to punish me for what I did, or didn’t do. After all, there were mitigating factors each time. I now realize I was wrong. I should be more aware of how my actions might affect her.

It isn’t that I shouldn’t ask her to provide me with needed information. But I really should consider how my request might affect her. I believe I should have emailed her and asked if she had time to help me with the insurance claim before I began working on the insurance company’s site. I didn’t respect her time. I was too involved with mine.

In the other case, I still believe that wasn’t a punishable offense. If she had called me and I failed to come out to say hello and help her, then I would deserve toasted buns. But in this case, I had no idea there was any need for me to go to her. Normally, if I am in the bedroom or my office, she will stop by on her way to change into her around-the-house clothes. I expected that the other night.

I think that the net outcome gets me a spanking and gives her a reminder to let me know what she wants. I do deserve to be punished for expecting her to drop everything in order to help me with the claim. I was wrong and naughty. She’ll probably report on my punishment in her post later.

The fact that these events came up at all is evidence that 3.0 is here more and more. The first step in this sort of growth is to recognize when something is wrong and verbalize it. The next step is to ascribe fault. The third step is to take corrective action. In the case of me not coming out to help, the correction is, I think, to call me. In the second case, I believe that I deserve to be punished for failing to respect her time.

Both events  provide real learning. My learning is reinforced with a paddle. Hers by thinking about solutions rather than just feeling upset. Of course, 3.0 knows that.

On The Way To Docile

We’re at the state park. I’m writing this on July 4th as I sit naked, looking out at trees, grass, and lots of other campers. We arrived yesterday afternoon. It took us a very short time (under 15 minutes) to set up.

There’s no cell service here. But our satellite dish found the mother ship and we have high definition TV. We have to drive ten miles to the nearest town so we can send our posts to the server. Ahh! Roughing it.

Last night we followed a little tradition and had dinner at the local Mexican restaurant. There are five places to eat and this was the first place we tried four years ago when we visited for the first time. At dinner, I managed to spill food on my shirt. For the record, this is the first spill in a long time.

Mrs. Lion, of course, noticed. As soon as we got back to the trailer, before I could undress, The very vicious rubber paddle was on the bed. She asked me if I noticed. I did. As soon as I was naked, she had me assume the position (lying across the bed), and she went to work. She’s definitely getting “better” at this. I turned and asked her to stop. She was sweating. I pointed it out. She said, “Yes,” and made a twirling motion with her hand. That means roll over. I did.

She kept spanking. Her swats made me yelp into the bed. I was very unhappy and getting angry. Anger is a sign of effective spanking. Generally, a spanking, if allowed to continue, will first evoke yelps and some sexual arousal. That arousal disappears quickly and is replaced by pure pain. After a while, anger sets in. After a longer time, that turns to acceptance and sometimes tears.

She is a devoted game player. Mrs. Lion spends as much free time as she can playing games on her iPad. She works at them until she beats them. She’s written that she is approaching punishment the same way. Each spanking is a learning experience for her. Of course, it is a teaching experience for me.

We snuggled before bed and Mrs. Lion teased me. She’s perfected controlling my orgasms. I’m sure she will perfect spanking soon as well. She’s also consistently aware of my behavior and is ready to punish me if I break a rule.

I think that the reality has always been that most people have a certain flexibility in sexual roles. Most people are culturally conditioned to treat sex as a limited set of genitally-centered activities. Of course, for women especially, there is a strong emotional component. There is “sex” and “kinky sex”. Most people might claim to like sex, but as for kinky sex, oh no!  Of course, you know all this.

Since the Net and Web have become ubiquitous, the gap between dominant women and submissive men has been closing. Part of it is probably the ability to express and test intimate things under the cloak of anonymity.  Some have taken their fantasies out of the ether and experienced them in real life. It’s easier to meet people who share an interest. Geography isn’t a limitation. The pool of potential partners is global.

Not surprisingly, a large majority of the people who use the Internet for sexual interaction are male. I think that majority is shrinking. More and more women are joining the conversation.

The most successful D/S relationships I’ve seen are between husbands and wives who married for the usual reasons. Power exchange wasn’t a big factor in why they selected each other. That was true of Mrs. Lion and I. We met because we wanted sex. We were very open about that. For our own reasons, we wanted to find a compatible sex partner.

As you know, this all changed when I suggested locking me up in a male chastity device. The device is the catalyst that triggered a sexual chemical reaction we now enjoy. Ironically, Mrs. Lion lost her interest in sex for herself. We both tried to revive it without success. That hasn’t stopped her from learning to be a most effective dominant woman (note: I don’t use the word “domme”. That is an invention of the folks on alt.sex.spanking). 2.0 is a fully developed dominant. 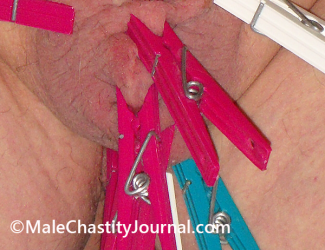 2.0 doesn’t even hesitate when placing strong, plastic clothespins on my most sensitive areas.

Mrs. Lion has evolved into Lioness 2.0. All the things she said 2.0 would do, describe her current state perfectly. Our play has a decidely painful tone. Clothespins applied to my balls are intentionally placed where she knows it will be most painful. Spankings are longer and my butt redder. I have sore spots that last a day or two afterward.

I find myself changing too. For example, the first time she used clothespins that intentionally hit the most painful spots, I was a surprised and a bit angry. It wasn’t the way I liked to be pinned. 2.0, of course, couldn’t care less. She went on finding those touchy spots. Poor me!

This past weekend we had another clothespin session. This time, if anything, it was worse. She made occasional use of painful plastic clothespins. I wasn’t shocked or upset. Yes, it hurt a lot, but I expected that. She made sure my erection stayed at maximum hardness the entire time. I really liked that experience.

It makes sense. The first time the sensation gets dialed up, it’s a surprise, not necessarily particularly welcomed. That’s where 2.0 comes in. She doesn’t care if I want or like it. It’s what she wants to do. My job is to learn to make the best of it. I’m not a consumer. I’m the victim. It’s a subtle-but-important distinction. I know I am not in control. That’s what I want, right?

At the time, it certainly isn’t. It’s the last thing I want. But now I realize it is exactly what I want and need. That doesn’t mean I will be laughing the next time a mean, plastic clothespin grabs skin at the base of my cock. I’ll hate it. But I won’t be shocked. I know what’s coming.

Many months ago, Mrs. Lion came up with the idea of Lioness 2.0. At that time, she was playing the way I liked it. She wasn’t comfortable pushing things out of her (and my) comfort zone. She wrote that 2.0 wouldn’t care how I felt about what she was doing. She would do what she wanted to without my input. At the time, she was very uncertain she could reach that point, but she saw it as an aspirational goal.

I have no idea what flipped the switch. But it happened. I may get to suggest activities or how to improve things she does to me. She’s still willing to accept that. But, she will take the suggestion and really run with it. My balls learned that during 2.0 clothespin play. Actually, before that, she used Icy Hot on my balls in true 2.0 style. She put on a thick layer, then massaged it in when it seemed to be wearing off. Then, when it was fading, she put on a new coat. She wasn’t particularly interested in how I felt about this.

Initially, I thought that 2.0 was just visiting. She’s done that before. But no, she’s here for good. I wonder if there will be a 3.0. If there is, will I live through the experience?