Wearever incontinence briefs were my first attempt at chastity underwear. They were comfortable, but a bit hot.

Enforced male chastity made me reconsider the underwear I needed. Generally, when I find something I like, I stick with it. I have always preferred briefs.  I tried boxers and boxer-briefs, but for comfort and holding my junk in place, I prefer briefs.

For the last few years, pre-chastity,  I have been wearing Ex-Officio briefs. They were pretty good. However, on a long drive or plane trip, they would ride up and pinch my balls. Needless to say I hated that. When I first began wearing a chastity device, I was quite concerned about people at work seeing it through my pants. So I scoured the Internet for a suitable product. I finally found mens incontinence briefs. They looked pretty much like standard cotton briefs, but had a thin pad in front (see image, right). They were reasonably comfortable and did hide the cage. However, as you might imagine they were a bit warm to wear and rode up during long drives.

I decided to go back to the well and try to find underpants that didn’t require frequent adjustment to stop pinching and binding. Amazon is my go-to place for most everything, so I searched their for mens briefs. I had no idea the world of mens underwear was so wide. In the briefs category, products ranged from big, grandpa underpants, to tiny g-strings that revealed the base of the penis.

It didn’t make a lot of sense to look for everyday standard briefs. Experience had shown that I had to frequently adjust to avoid pinching. I wondered if there isn’t something else out there. It turns out that there is. The Australians, who I guess are the experts “down under” have come up with a new category: pouch underwear. 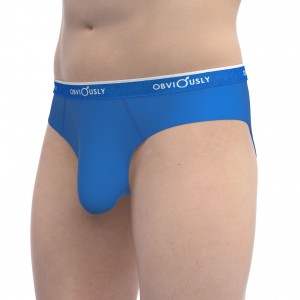 This is the Obviously Modal full brief (click the image for the manufacturer’s web page). I settled on these because the large pouch easily accommodated my caged penis and balls. Nothing shows through my clothes. Check out their “Naked” line for less pronounced pouches. Unfortunately, when stock runs out, the modal line will be discontinued.

This pouchy underwear comes in all styles from boxers to g-strings. I ordered several styles. Amazon allows free returns on most clothing. I ended up returning a lot. I settled on Obviously (an Australian company, of course) Modal Full Briefs. These have the largest pouch of the company’s products. Their “Naked” line has a less pronounced pouch and is probably better for most.

Ok, so I got new underpants. How does that relate to enforced chastity? The answer is simple. Normal briefs push the cage and your balls back into your body. This isn’t a problem if you don’t wear a chastity device. But if you do, it pretty much assures that you will be pinched and will be adjusting frequently. This is one reason why many caged males end up in boxers.

The pouch underwear actually has a separate compartment for your package. It’s very soft and swings freely outside of the briefs. When you dress, the pouch fits nicely into the crotch area of your pants and provides a comfortable nest for your caged penis. I wear jeans most days, and nothing shows. If I bend over , the pouch moves with my body and effectively keeps the cage out of site. Normal underwear will push the cage down when you bend over and will create an interestingly shaped bulge.

This underwear is expensive, but for me at least, it makes being caged a comfortable experience and I hardly ever have to make that little wiggle to stop from being pinched. Aside from that, I’ve never been so comfortable in underwear.

Underwear fetishes
A significant number of caged males also like to wear women’s underwear. This can be problematic since female undergarments are not designed to contain external sexual hardware. However if this is your thing, don’t worry, there are frilly panties built for the male anatomy. Xdress.com offers a line of male lingerie. This isn’t my thing, so I can’t comment on how this works with your enforced chastity.

If you like to wear women’s underwear, you may want to discuss this with your keyholder before parading around the house in lace panties. Just because she is supporting your chastity kink doesn’t guarantee that you will be as lucky with cross dressing. Some women love it, but most don’t. It may have to be a secret fetish. Bear in mind that your keyholder is going to need a lot of time just to get comfortable with caging you. Each additional kink you add to the stew will make her transition to enforced chastity that much more difficult.

Don’t underestimate the importance of carefully selecting underwear that works with you and your chastity device. The wrong choice can cause constant pinching and discomfort. The right choice will let you forget you are wearing a cage when you are out and about.